It was 2002. Oakland Athletics baseball team and its general manager Billy Beane were facing a difficult challenge. How to win in an unfair game? At that time, baseball was all about the money. How much money you have in the bank directly translates to how many top players you can buy. Having only 40 million in the bank (compared to Yankee’s 125 million) meant Beane will have to improvise with mediocre players at best. Luckily, Beane was a visionary willing to try new methods of choosing the players for the team. Along with Ivy League Economics graduate and ‘big data’ nerd Peter Brand, Beane introduced a new level of decision making for players selection. They called it sabermetrics. This methodology proved that numbers and statistics were way more effective than the club’s selector know-how. This analytical and evidence based method towards assembling professional baseball team has lead the club towards a 40 game winning streak, despite A’s disadvantaged revenue situation. Fast forward 10 years into the future and every baseball clubs plays ‘Moneyball’, having a full time sabermetrics analysts hired.

How come that in 2016. we do not have a similar formula in retail environment? How come that when we predict revenue, we predict it only by predicting traffic and conversion, drivers which we do not fully grasp how to influence? How come that our players (consumers) are almost always left on their own to navigate our playing fields (stores)?

At Monolith, we deeply care about Shopability. Shopability is to the stores what usability is to webpages. Shopable stores have perfect staff to visitor ratio where consumers engage optimally and the store is covered equally. As a result, Shopable stores drive retention, repeat sales and positive image. Most retailers agree that understanding of human behaviour is the hidden driver of increasing profitability. However, which two aspects of aggregated human behaviour in the stores are most important? In the course of the last three years, from Oxford street flagship stores to Geneva Car Show and a department store in Bern we had a privilege to optimise stores of world’s leading brands. One correlation point is almost always consistent. Shopping time is the biggest driver of conversion. When we increase the shopping time (however not too much) we always increase the conversion. Furthermore we have seen one new KPI which describes floor plan and fixture performance, coverage. Coverage is the percentage of the space being covered by most consumers. If we have coverage close to 100%, we have congestion for sure. If we have it 40%, we have a couple of blind spots in the store. This metric heavily influences Units Per Transaction. Driven by these core findings we have derived a whole new formula which is becoming a gold standard when predicting the revenue in retail. We call it ShopperBag formula. 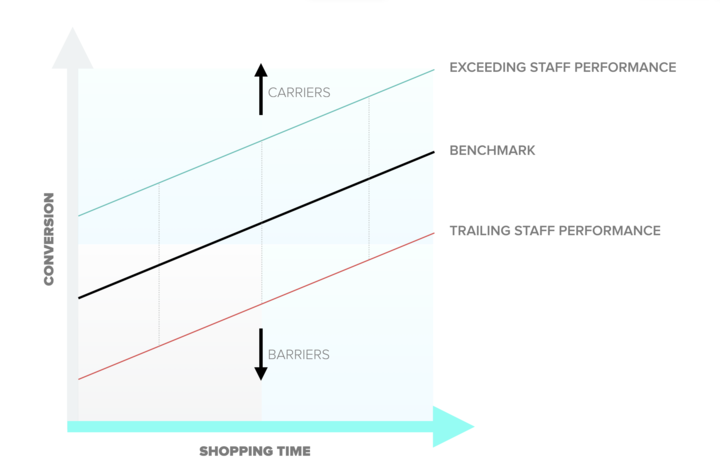 On the other side of the equation, we have barriers. Too much visitors at peak hours, queues in front of the fitting rooms, inadequate store logic and distractions (too much advertising screens) will drive Shopping time down - and the conversion as well.

The central premise of ShopperBag formula is its focus on drivers of economic metrics, rather than economics itself. By creating this shift, we do not rely on luck or on drivers we do not understand. We rely on drivers we understand and that are actionable.

Collective wisdom of retail experts (visual merchandisers, retail managers, store execution, staff in the door…) is subjective and often flawed. KPIs such as Conversion are the relics of old fashioned people counter mashed up with POS device. At the centerpiece of ShopperBag we focus on Shopping Time and Coverage as two key drivers of Conversion. Once we are able to understand drivers we will know how to optimise and create both impeccable service and store design.

Stay tuned for more store(y)telling and tips on how to increase conversion by MONOLITH’s ShopperBag formula.

Get the latest posts delivered right to your inbox

If you would ask 100 retailers what is the most important metric they track on the daily level, 99 of them would shoot: "conversion". When you would ask them what is

In 2015, E-commerce growth outpaced in-store growth by nearly 5 to 1. In the US, Black Friday sales decreased by 11.9% compared to 2014. The forecast is looking gloomy for physical retailers

Shopability Issue
—
ShopperBag: The Art of Winning Every Consumer
Share this

Stay up to date! Get all the latest & greatest posts delivered straight to your inbox